Yesterday our brave troops engaged the invading Harzburg hordes.  This reporter interviewed many of the participants and the available bystanders, their statements provide the facts for this report.

The League received reports that a flying column would try to plunder the countryside as they probed toward Muhlehause. The task of identifying their path was aided by the swollen nature of all the waterways.  The only good position for a pontoon bridge was near Greuberbach over the Freshet river. Scouts confirmed the Harzburgers construction of a pontoon bridge and the presence of troops ready to march. 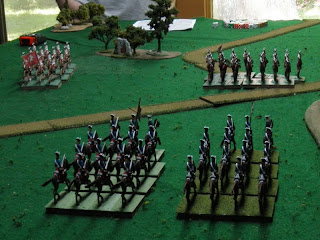 The league sent their nearest troops to block the Harzburg advance. The League sent the Flatsburg Dragoons and the Schwabian Dragoons to screen the infantry. The infantry brigade was composed of the following battalions Furstins Own, Flatsburg, Muhlehause, and Adlerzwillinge.  Each infantry battalion was equipped with a 3lb battalion gun. 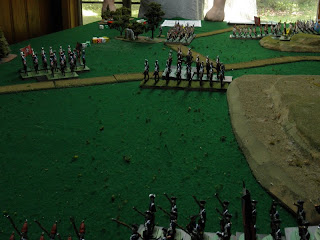 After spending the night near the pontoon bridge, the Leagues troops moved out to engage the enemy.  The Dragoons moved out ahead of the infantry to block any interference in their deployment. The Dragoons each engaged a separate enemy Dragoon unit in combat. Separate combats lasted till the lead infantry battalions began to deploy then ended. The Flatsburg Dragoons bested the Aubach Dragoons who routed from the melee but managed to hold onto their flag. 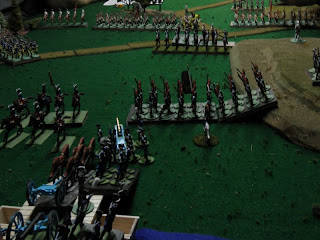 The Schwabian Dragoons, in their first action, engaged the Klineburg Dragoons and were routed but kept their flag.  At this point the victorious Dragoons withdrew to regroup while their routing comrades would leave the field not to return. 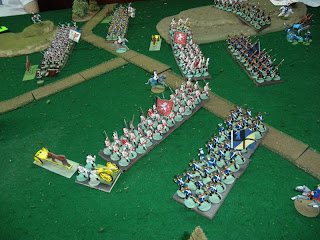 With the preliminaries out of the way, the infantry closed upon each other to engage in firefights. The Flatsburg Musketeers Bn deployed to oppose I Bn Lowes Musketeers while the Furstins Own Musketeers opposed von Striblings Converged Grenadiers and I Bn Brants Musketeers. 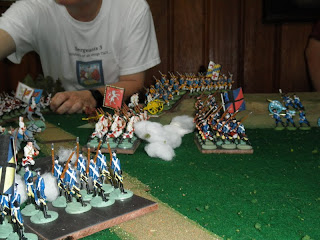 The first rounds of fire by gun and musket saw the Converged grenadiers rout with more than 50% losses. Brants moved to cover the hole left by the grenadiers and engaged the Furstins Musketeers while I Bn Muhlehaus Musketeers advanced on the left flank of the Furstins Own to join the fight. 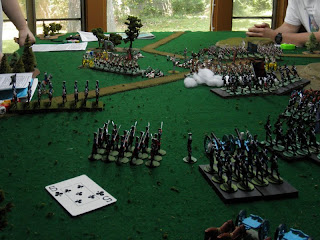 Flatsburg Bn routed the I BN Lowes opening the way for their advance. 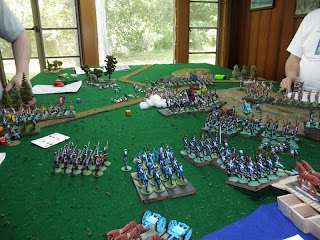 The Klineburg Dragoons moved out to occupy the Flatsburh Musketeers on the Harzburg left flank. In an orders mix up they rode out alone with no support. They would sell their lives and buy the time needed then withdraw in good order. The Artillery Regiment deploys behind the front line next to the pontoon bridge. 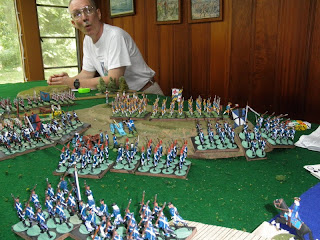 The Muhlehaus Bn switched their attention from I Bn Brants to Harzbach Converged Grenadiers and I Bn Thalbers. The brigade gun would shield them from a full volley by the grenadiers. The firefight would last until the end of the battle. 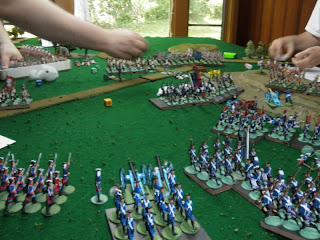 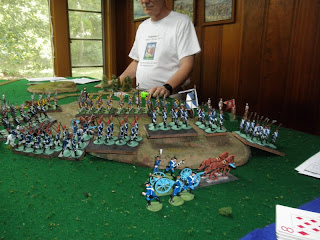 The firefight on the hill continues with neither side giving an inch. 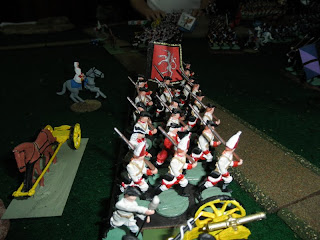 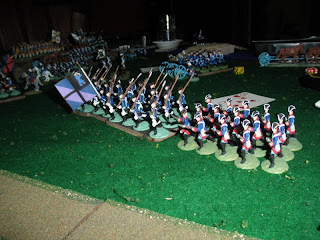 They watch I Bn Fenstermacher and the Artillery Fusiliers advance to engage them. The Flatsburg Bn has taken many casualties but they refused to withdraw. 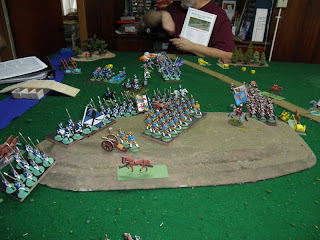 The battle came to a end with both the Flatsburg Bn and Brandts routed from their firefights. Harzbachs Grenadiers and I Bn Thalbers engaged their firefight while I Bn Adlerzwillinge awaits the attack on their right from I Bn Fenstermachers and the Artillery Fusiliers. Our brave boys had blunted the Harzburg thrust and now pulled back to continue to screen Muhlehaus from Harzburg.
Posted by NOMADIC OLD SCHOOL GAMER. at 8:50 PM

The International Commission on Nobility and Royalty

The Ancient and Honorable Order of the Tankard

NOMADIC OLD SCHOOL GAMER.
Active gamer since the early 70's. As the only gamer in SE Arkansas, I have to drive 150 miles for a game with my old comrades the Jackson Gamers.

Links to site of interest